The Jalloo Festival of Animation and Games was this weekend, and as a graduating student, I got to be a member of the showcase! :)
As such, we had to have a prototype demo reel to demonstrate our work. I'll be working on it further over the next few days, but since I have the video uploaded anyway, I figured it would be worth posting up on the blog.

On the topic of Jalloo, it was a blast! I enjoyed attending and volunteering previous years, but it was really cool to just see the other graduating students' displays, and to talk with a lot of professionals at my own booth. Of course, the panels and arcade were also pretty fun, and it was super cool to meet Jim Hickey. I hope I'm able to return next year, too! :)
Posted by Jordan at 2:48 PM No comments:

As I now have a few animations uploaded online, I figure it would be best to upload a little of what I've worked on this term for animation too!

We had a different instructor this term, and as such, instead of Flipbook, we've been animating a lot in Flash. I've definitely gotten better and more confident with the program as a result!


This was the first animation we did this term. It was part of the 11 Seconds Club back in January. It's all rather rough, and there's a lot of animation to finish, but for my first actual animation in Flash, I feel I did alright! I definitely learned a lot from it, which helped speed up the next project a fair bit!

I got some revisions recently on this animation, so if I have the time to revisit and finish it, you'll be seeing it again! :)

Our second project was a team project for the 11 Seconds Club in February, in which I worked together with David Phan. We each animated a character, and the cleaned up each other's characters. I did the rough animation of the scientist, and cleaned up the cat's animation. It's the first time we've cleaned up someone else's work, so it was definitely a learning experience.


This was the most recent animation of ours. Our instructor, Tara Audibert, designed a snow ferret character for the class to use in a daisy chain animation. The very first frame of the animation is supplied by Shelby Christie, and using that frame, I had to get to my last frame (which was made before the rest of the animation).
Our combined animation will be added to the monthly loopdeloop contest, which had the theme of rainbows for this month!
Posted by Jordan at 2:58 PM No comments:

One of our assignments this term was to create a pitch poster and pitch page for a fake series of our creation. 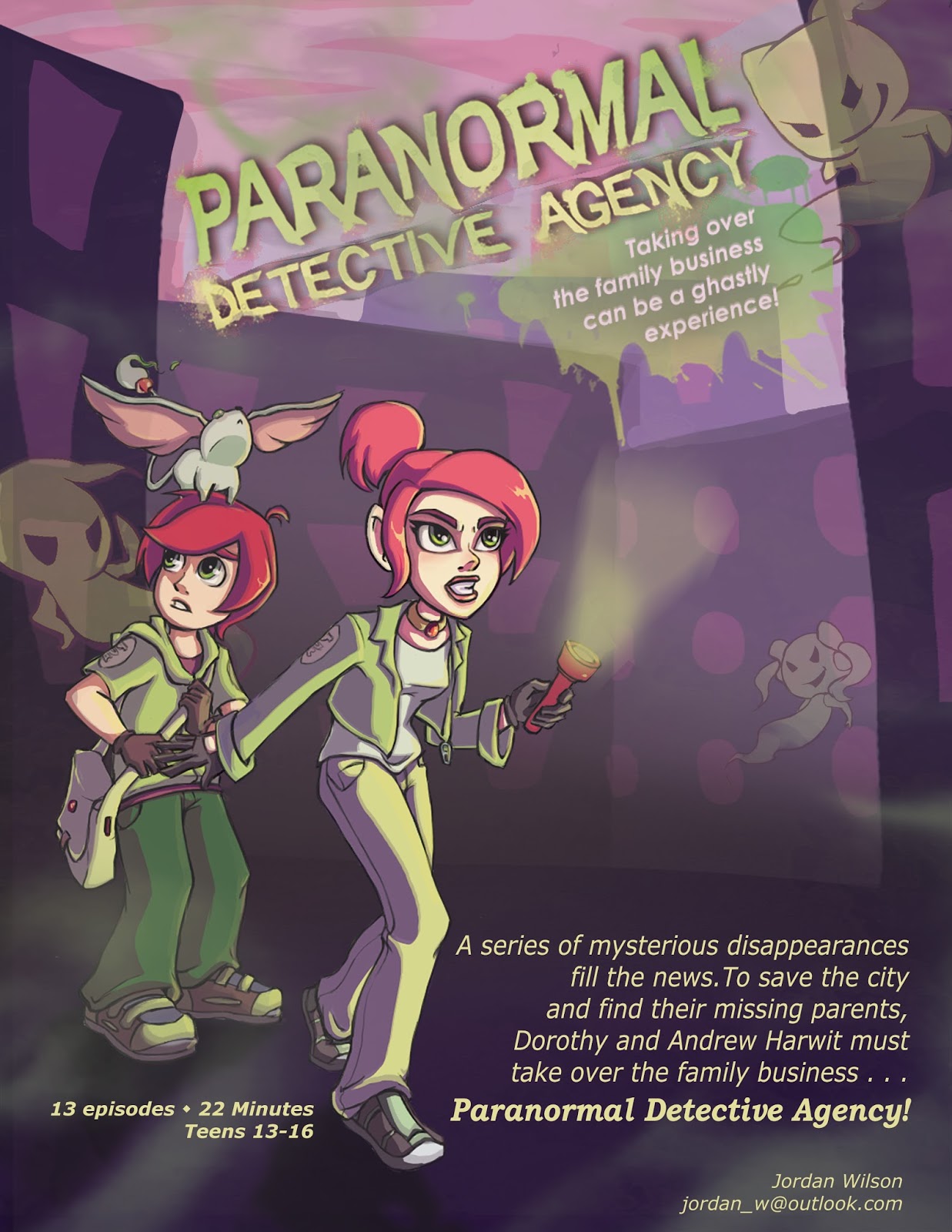 My series is evidently Paranormal Detective Agency. The focus isn't on the creepy aspect- it's more of a fun creepy atmosphere, if anything- but instead on how Dorothy and Andrew have to step up and take responsibility in order to help uncover the mystery. They're inexperienced, but they'll learn and grow throughout the series because, even if they don't want to, they'll have to, if they want the disappearances to stop. Through solving the smaller mysteries around, they gradually uncover what's really going on behind the scenes in the city. Whether they save the city or not... who knows? :)

Oh! And the little animal on Andrew's head is Spi, the family's familiar. It's through him that they're able to track ghosts from a distance.

That's about all I'll say about the series for now, ha ha. I don't know if I'll ever develop the idea more- if I do, no doubt a lot of changes will be made- but it was a fun little project to do!
Posted by Jordan at 2:28 PM No comments:

We recently had a project consisting of drawing the model as a character! It was really fun to do, and pushing the poses while simplifying everything in the given amount of time was definitely a challenge! I feel like I have improved a lot this term, and I hope next term turns out just as well! 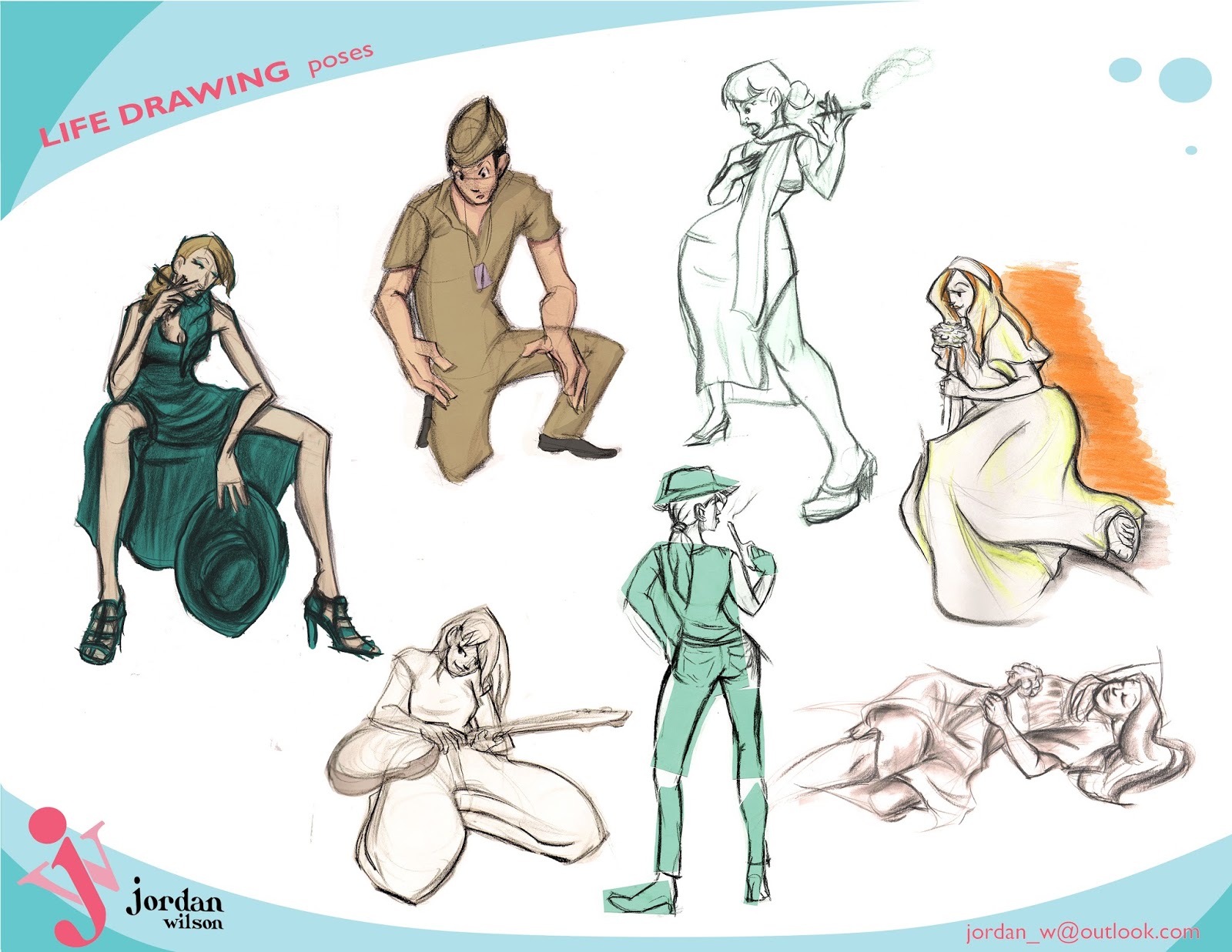 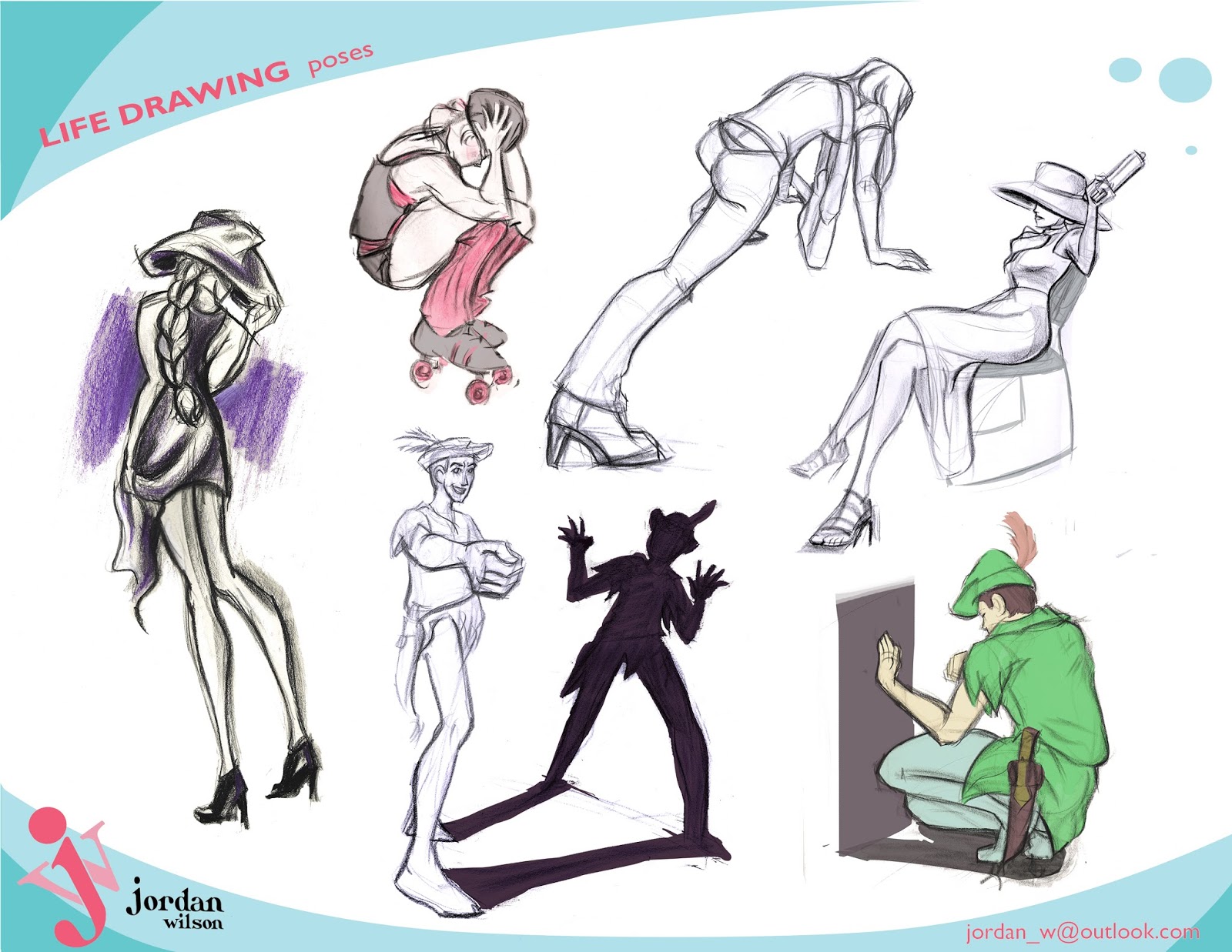 As usual, colors are a blast to work with! Some of the colors were added digitally, while some were added with colored conté during the poses. The cowgirl on the first page actually has cut out scraps of paper for color! :) 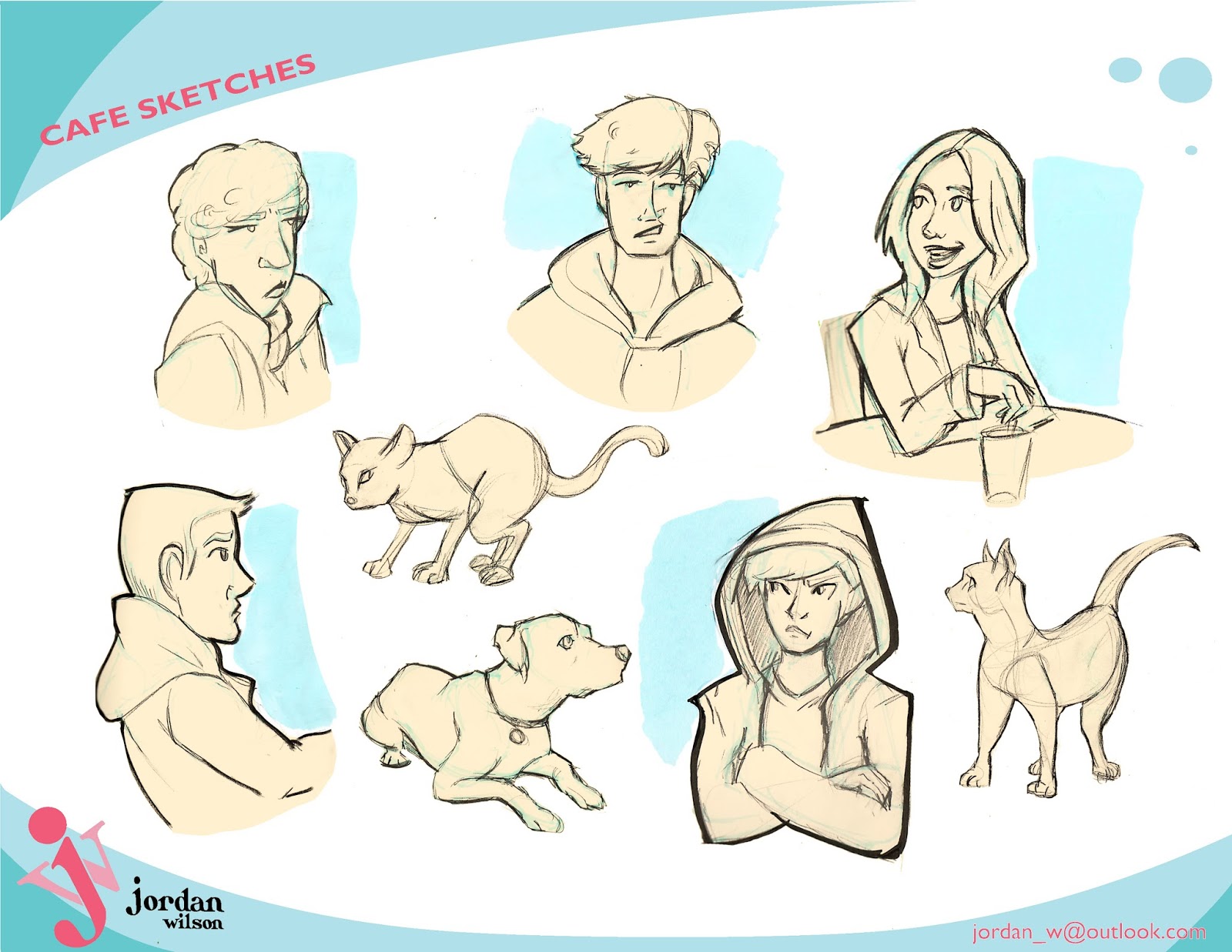 My second page of café sketches for this term! We got to see some of Stephen Silver's café sketches, and I noted that he liked to use blocks of color to help the drawing stand out from the page, so I tried it out for myself. I like the way it looks!
Posted by Jordan at 2:03 PM No comments:

My blog layout is mostly stabilized now! Thanks to everyone who put up with the disorganized state it was in and out of for a bit!

Here are the drawing jams I've done for http://tarasdrawingjam.blogspot.ca/ this term! 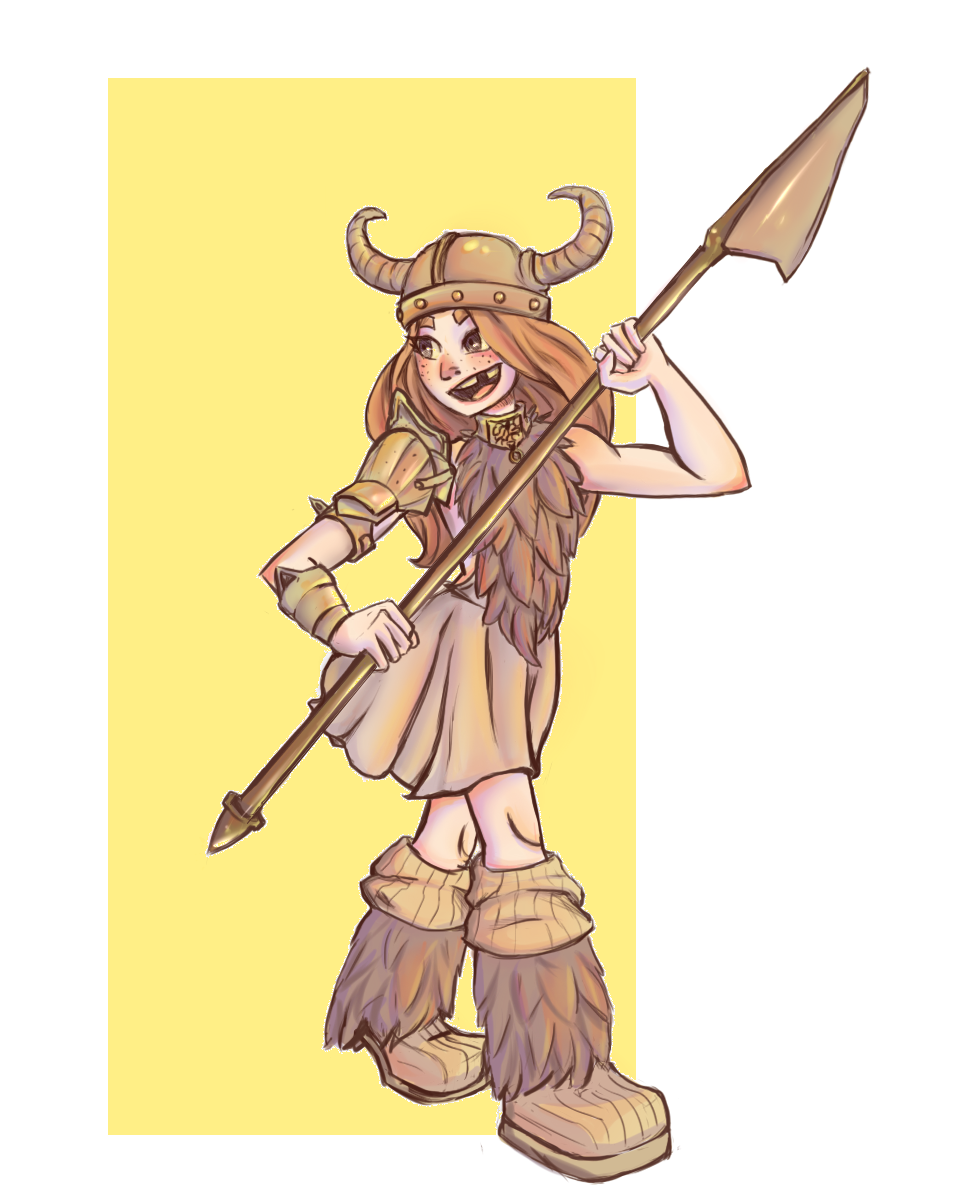 This drawing jam consisted of taking one of the outfits, and designing a character in them. The extra challenge was to do it in How to Train You Dragon's concept art style, so while I didn't copy the style exactly, I used it as influence on the character design. :) 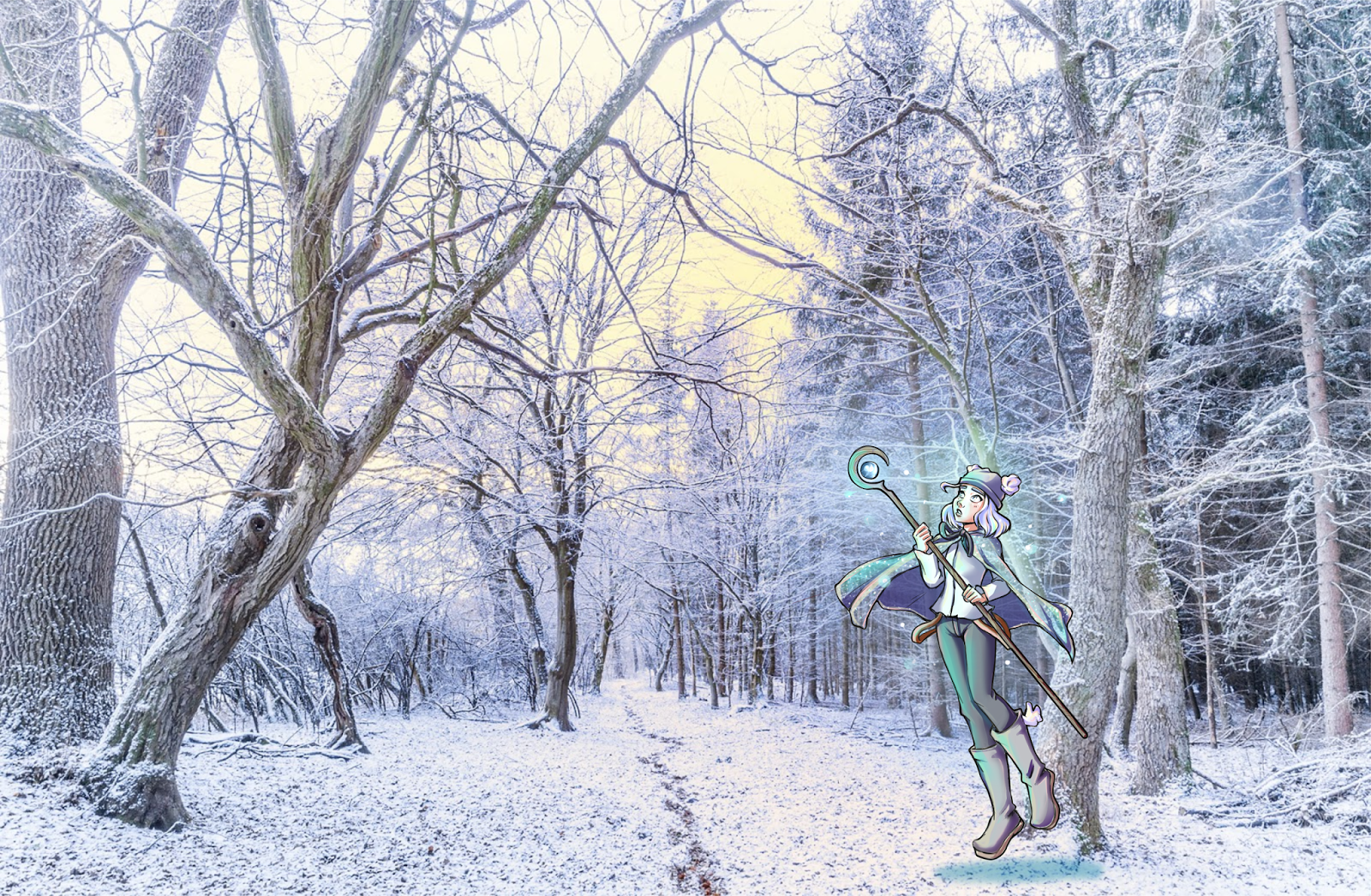 In this drawing jam, we had to design a character that would fit into the stock backgrounds supplied. I thought it was a good opportunity to play with some fun magic stuff! 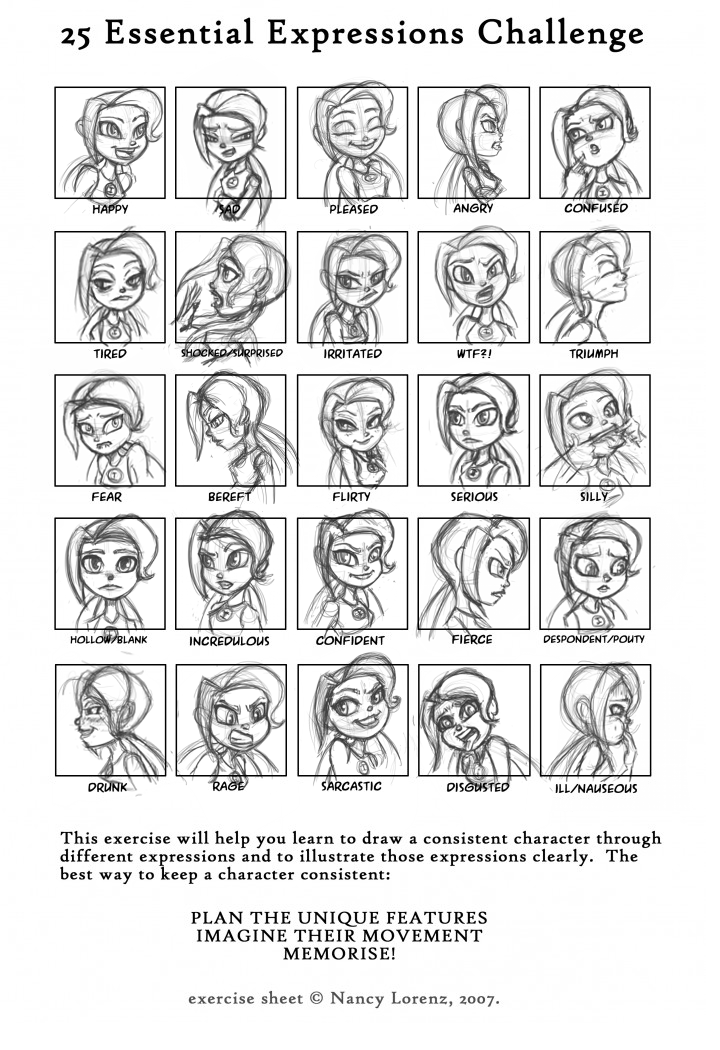 This one is pretty self explanatory, ha ha. We took a character and had them do 25 expressions. Some of the better ones have already been posted on the blog. :) 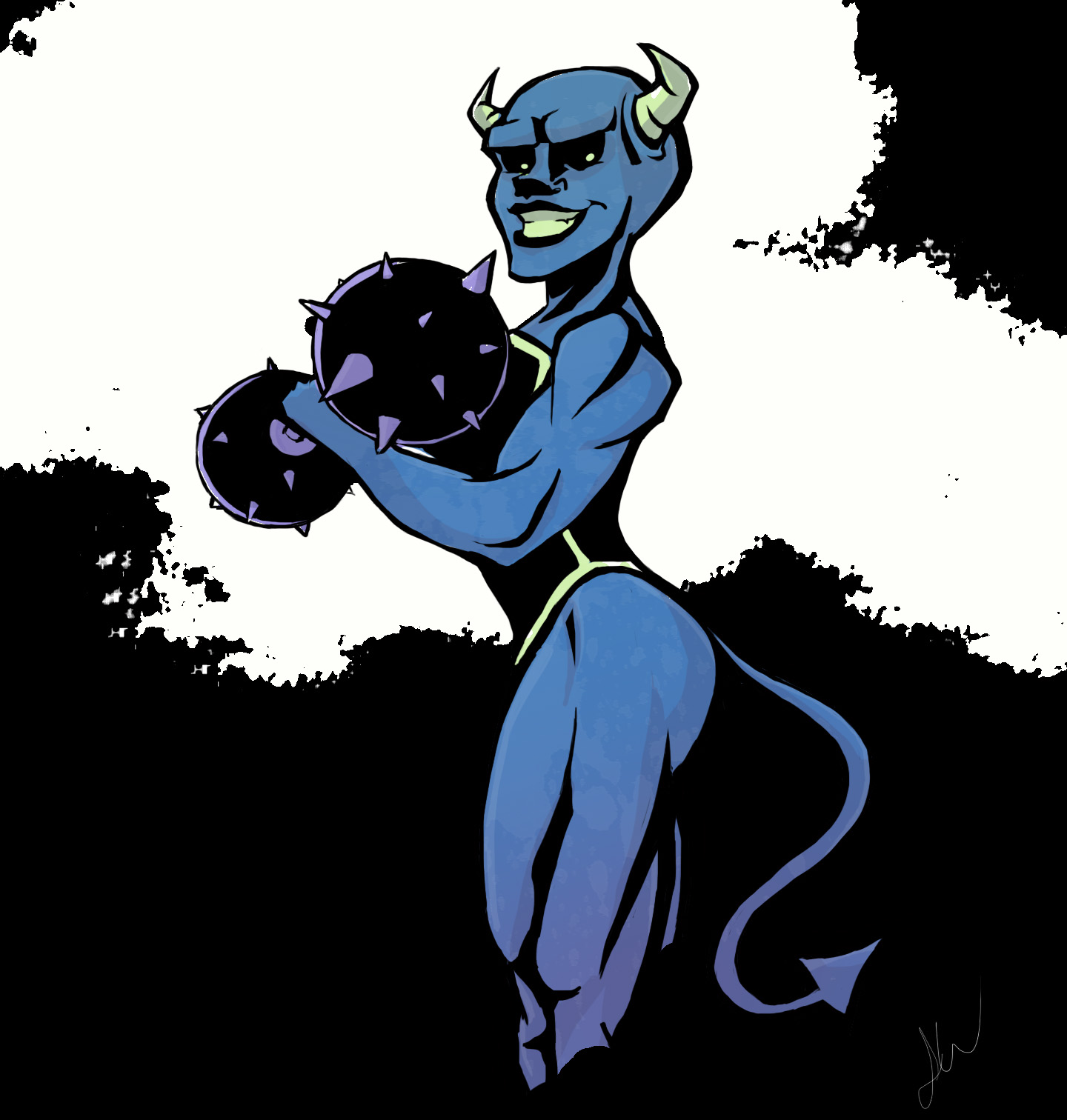 In which the challenge was to draw a muscular character, bonus if in the style of Mike Mignolia. Again, I mostly used the style challenge as influence and went off on my own path from there. It was fun, though! Seeing his art really makes me want to read Hellboy now! 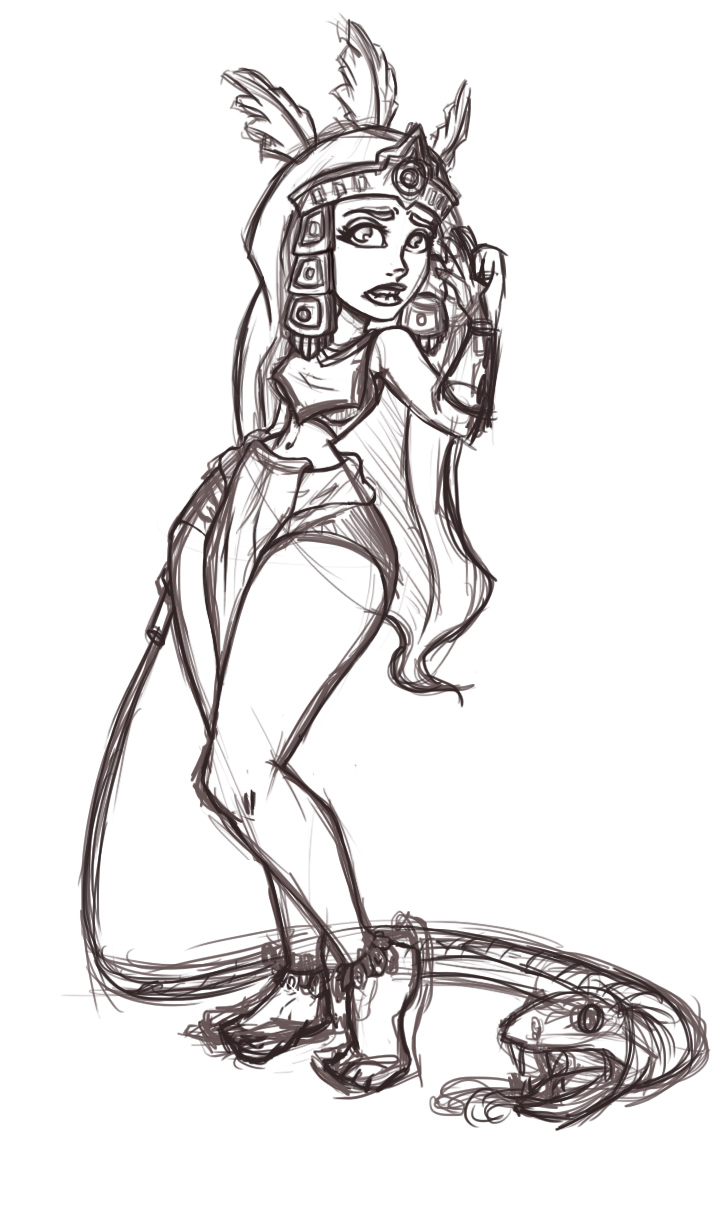 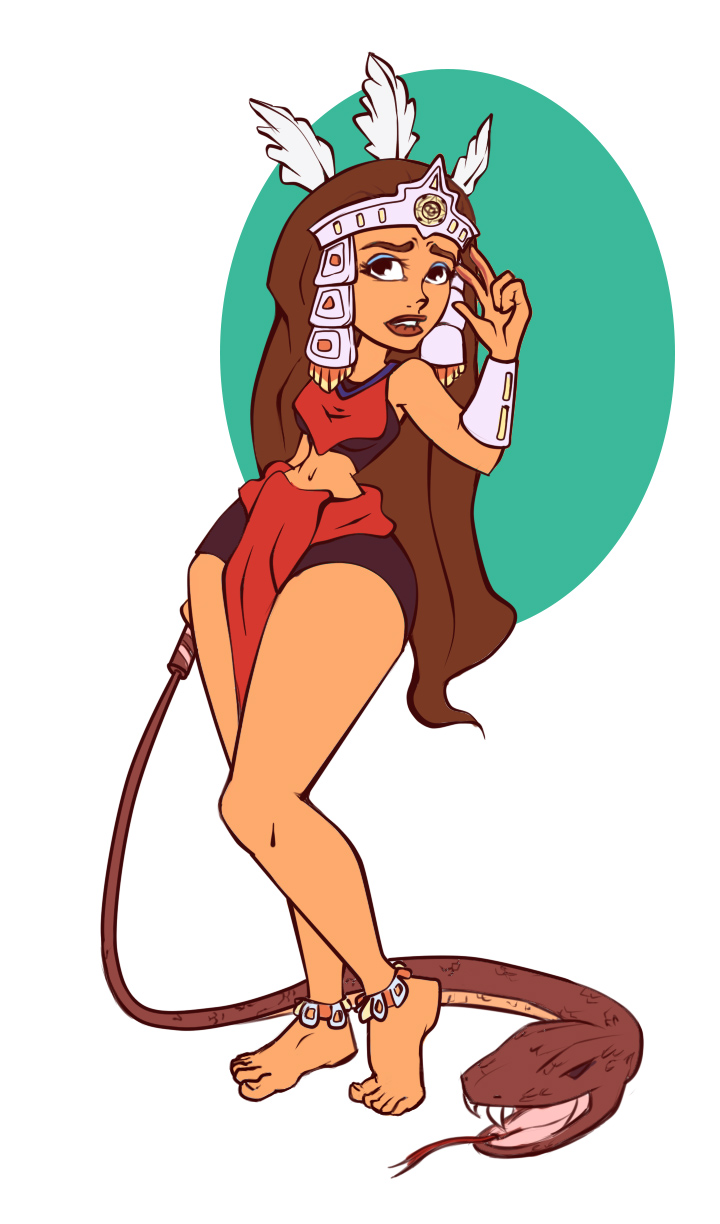 This drawing jam was the Lady Knights Randomizer by http://dogbomber.tumblr.com/. As I originally posted just the sketch, it's only fair I keep the sketch up along with the clean version!
Posted by Jordan at 1:53 PM No comments:

I've started cleaning up my blog; specific pages will be added, the template will be changed, and a few of my previous posts will be edited/deleted.

So the blog might look messy for a bit; sorry for the inconvenience!
Posted by Jordan at 11:47 AM No comments:

I just realized I haven't updated my blog at all this term, so here's a few things I've done for life drawing that haven't been uploaded, newest to oldest.
We've recently been experimenting with branding, so my name style and the colors on the pages are, for now, all different, ha ha.

We've been focusing a lot on force and characterization this term in life drawing. It's been challenging to loosen up, but really fun so far! I can see a lot of improvement! :) 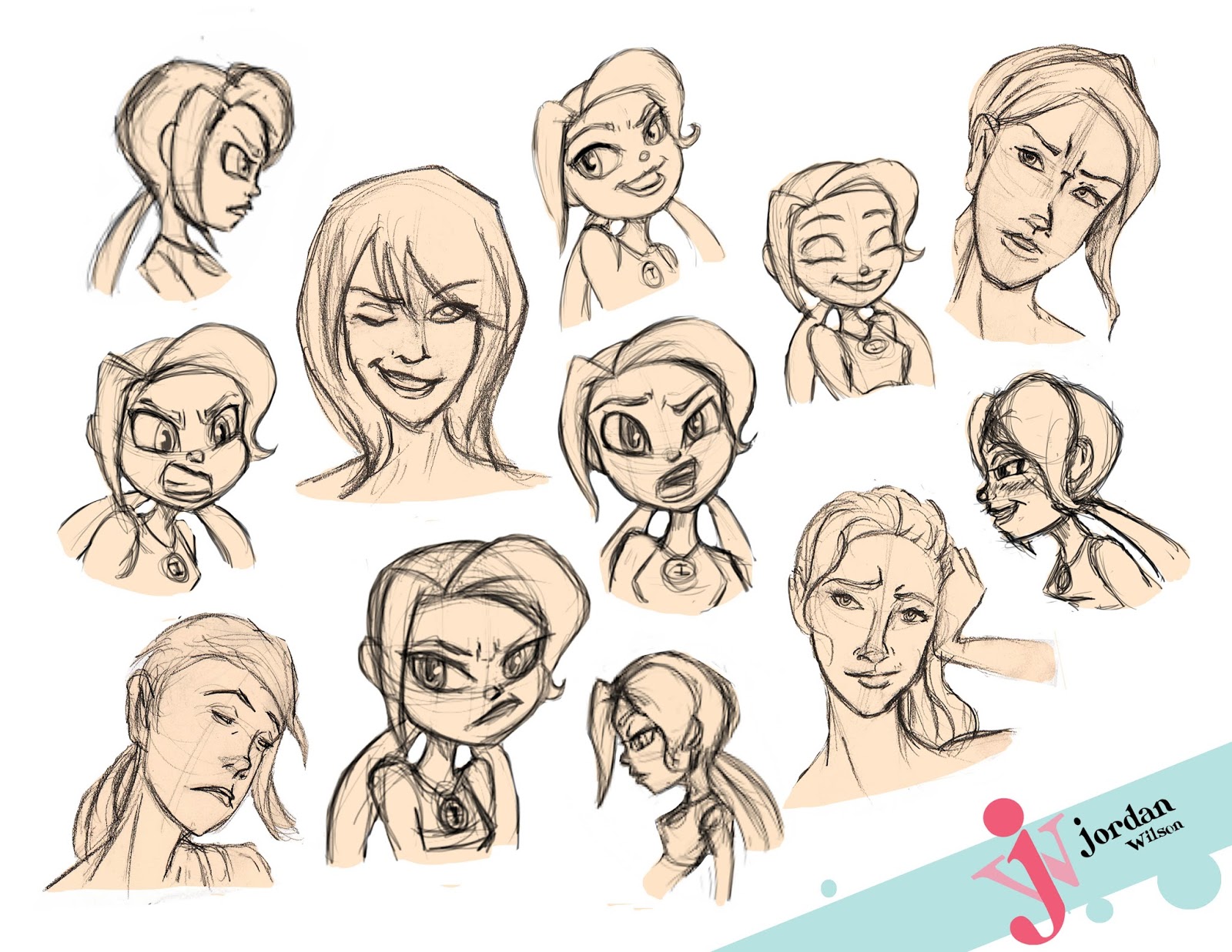 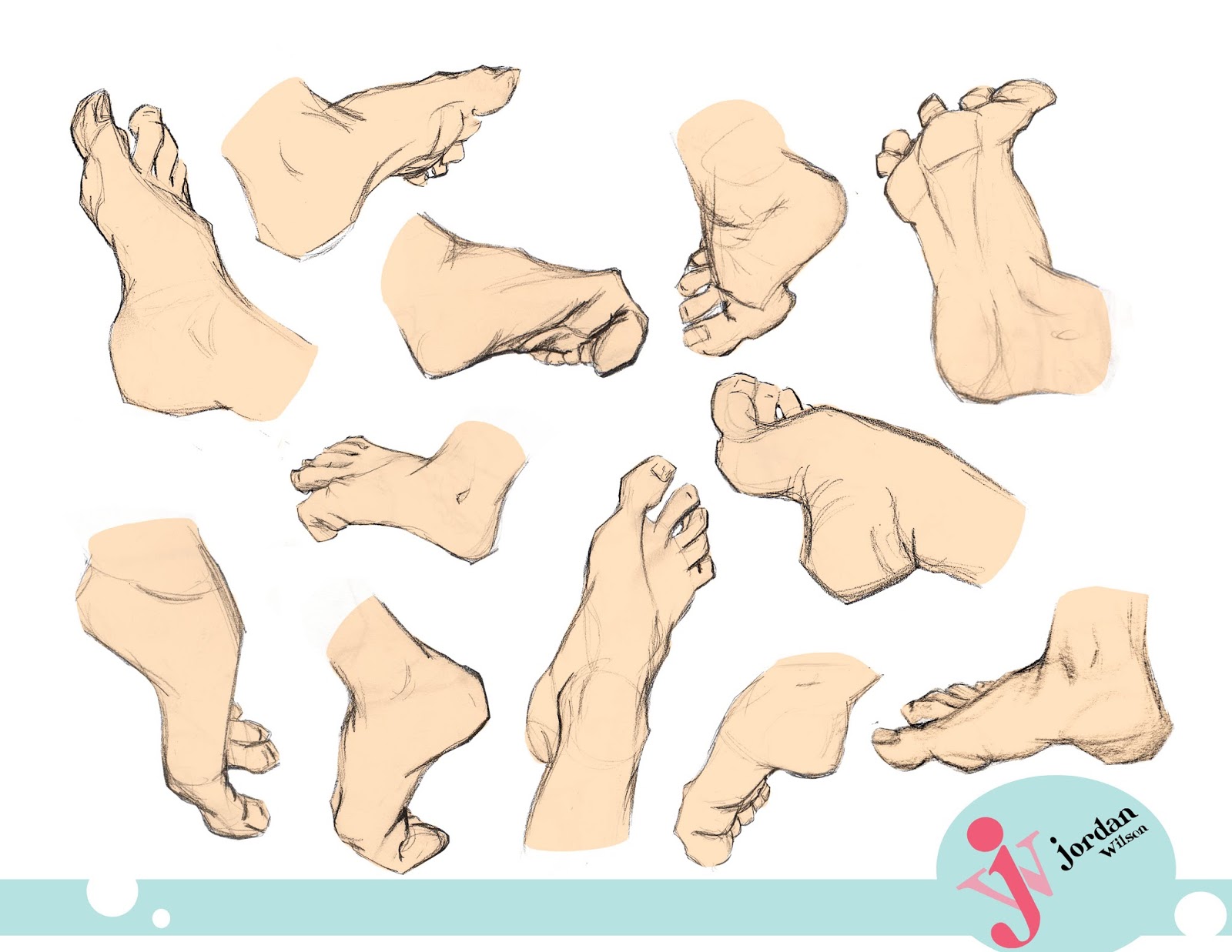 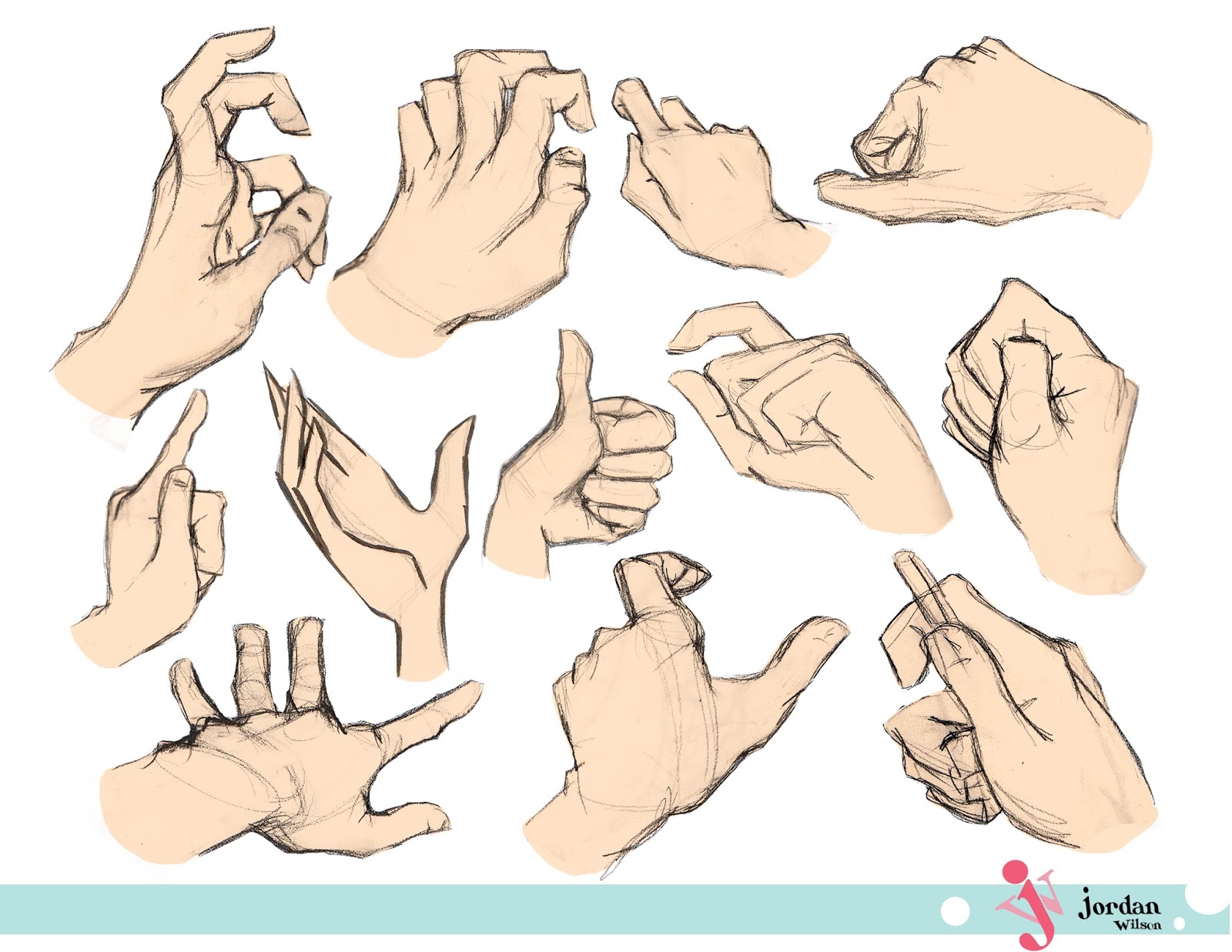 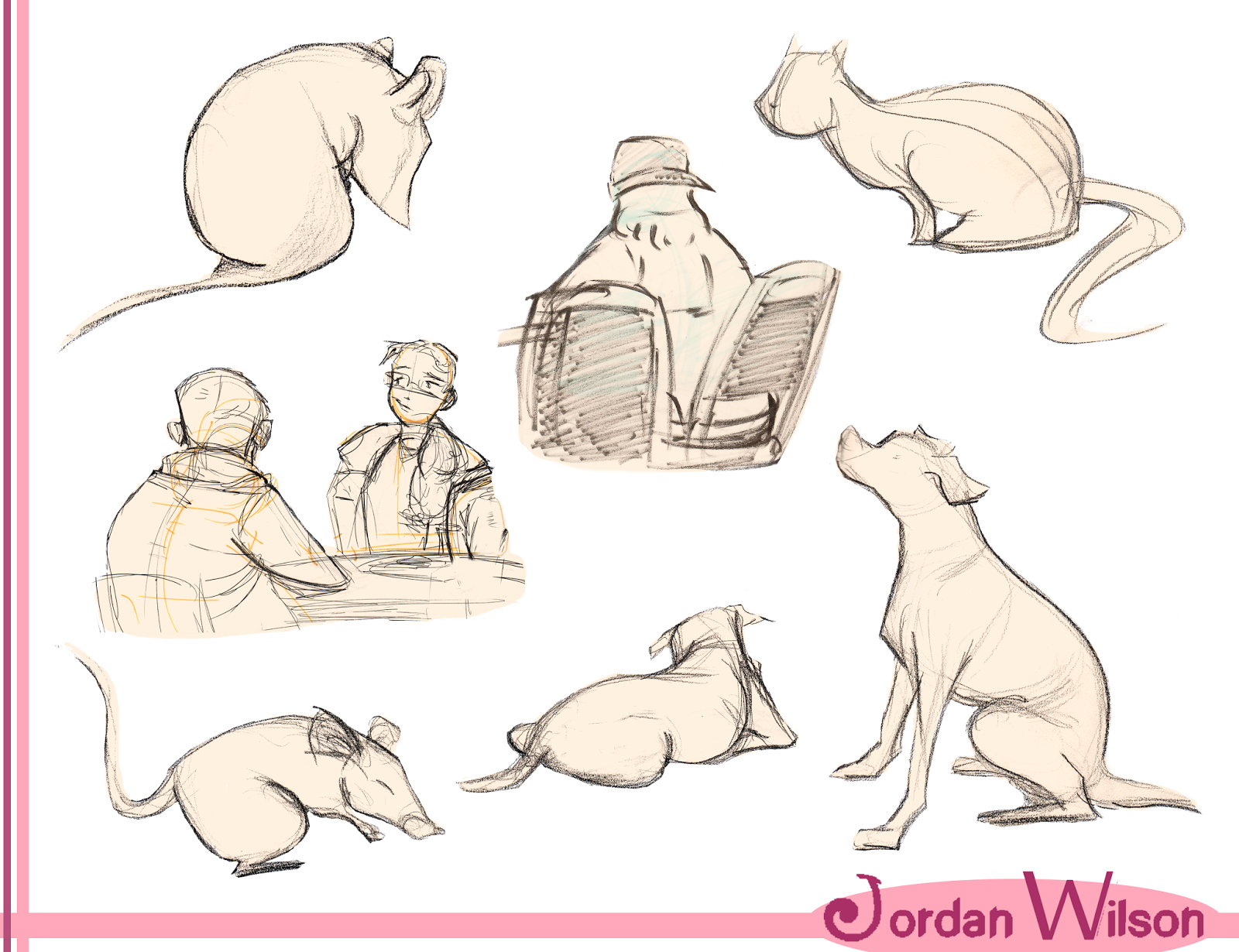 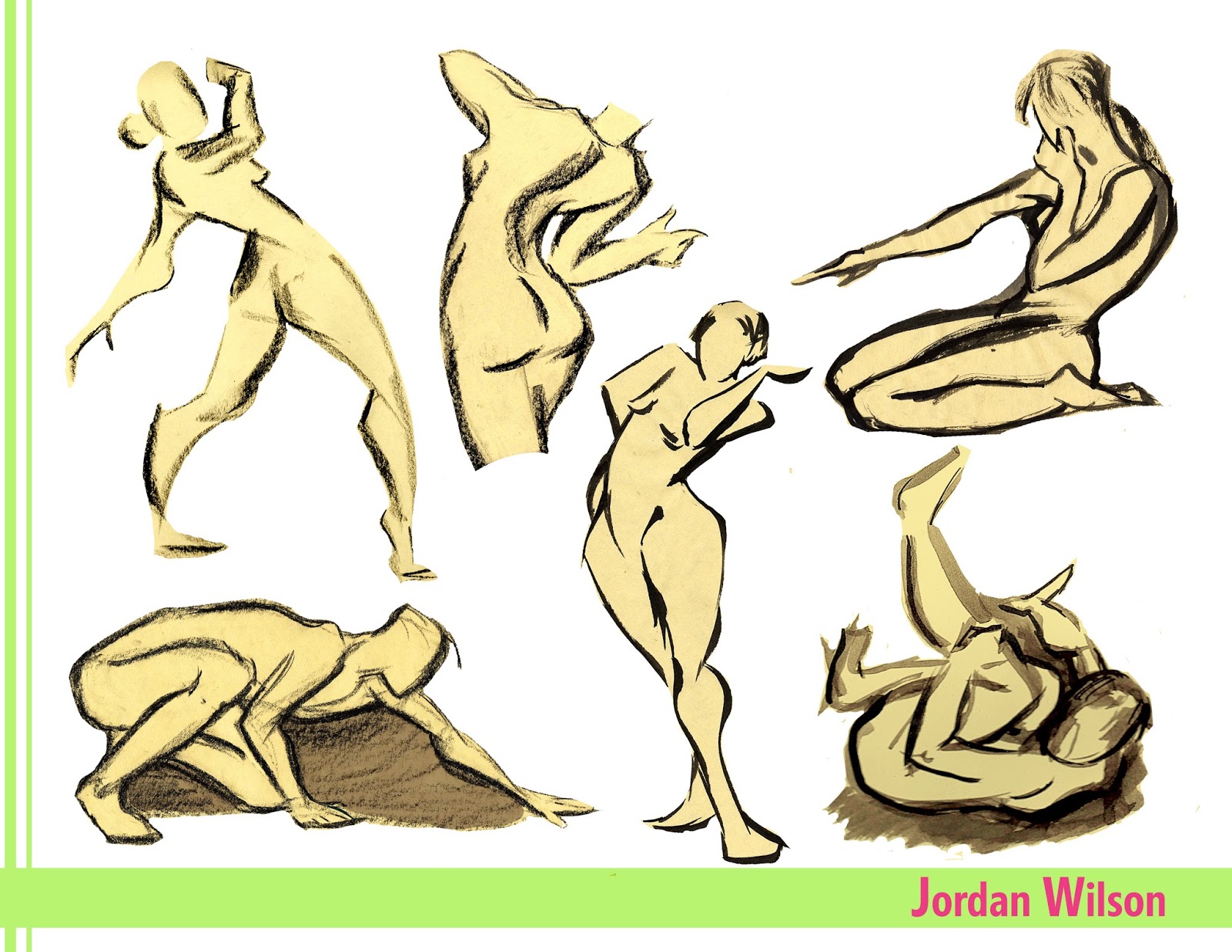 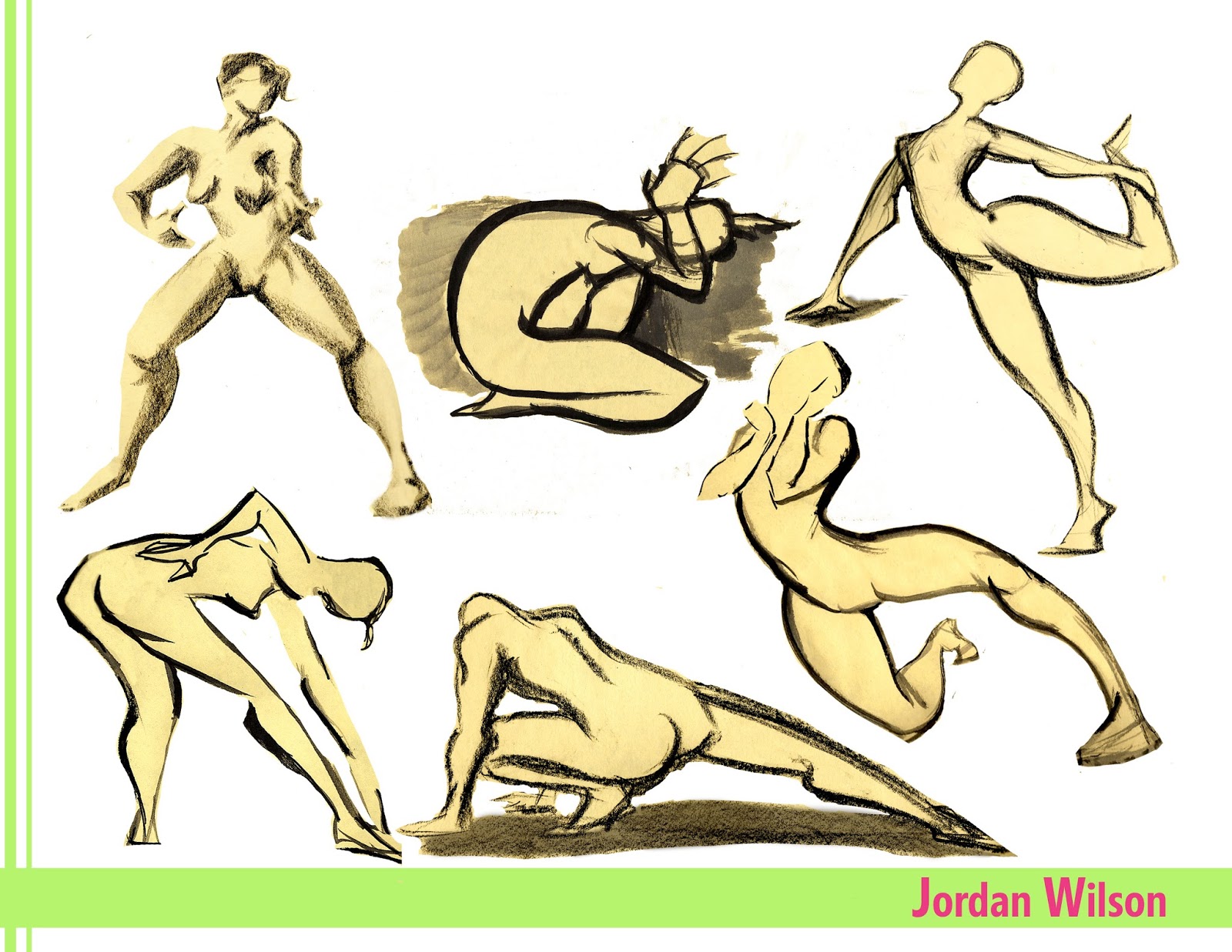 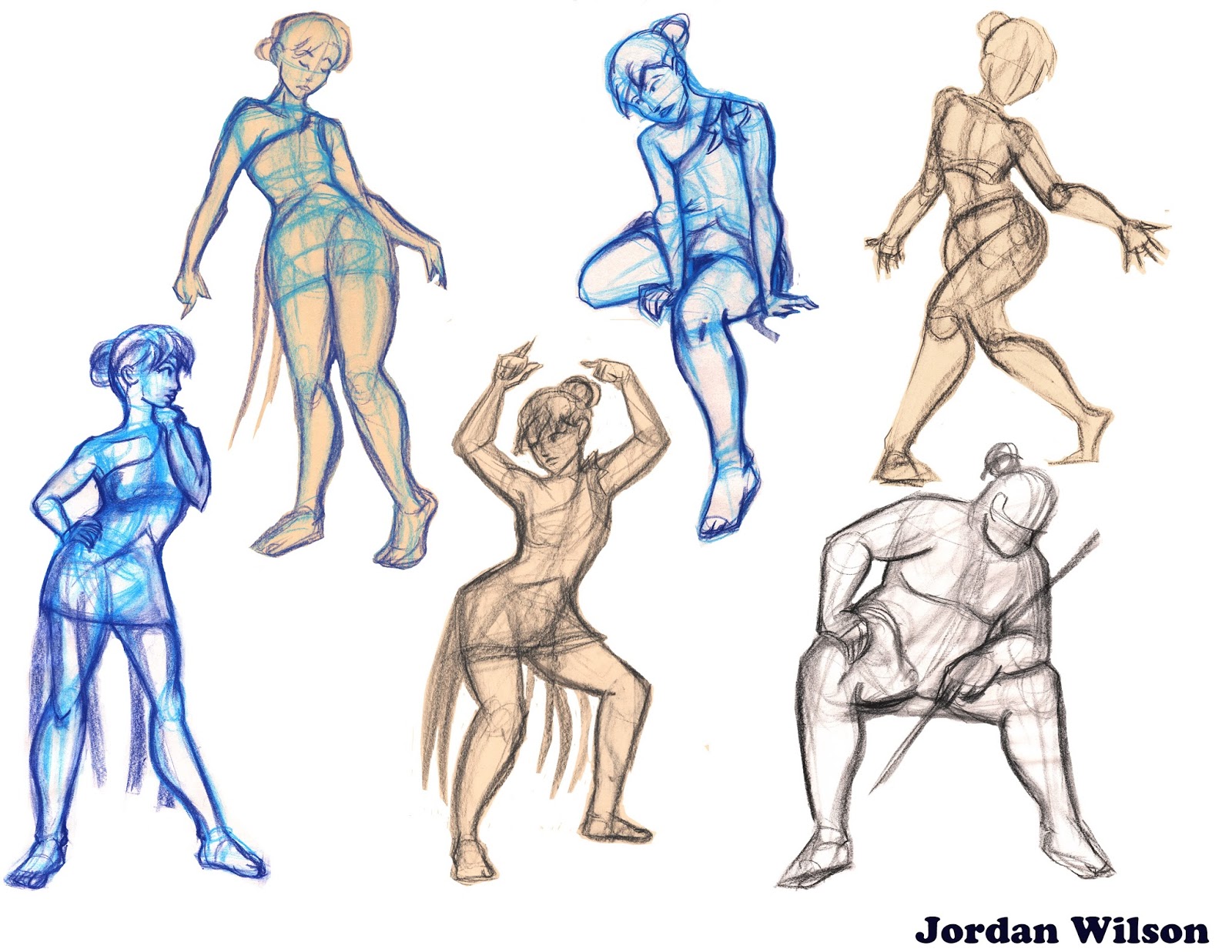 Posted by Jordan at 9:35 AM No comments: